Recently I changed the way I approach trading system development. Reading A Different Approach to Money Management is what gave me the original idea to alter my approach to trading, but my research is what pushed me over the edge.

I approached trading system development with the goal of trying to develop a system with maximum exposure. I didn’t think of running two systems at the same time on the same pool of money (without splitting up the money) if the systems had little/no conflicting signals. Since most of the systems I tested on SPY either had either:

I was left with trying to develop a new system, or trying to trade the system over a large group of stocks (I used the Nasdaq-100 as my stock universe). While I was able to ramp up my exposure to around 70% with any system I tested, I often had to trade 5 or more stocks just to have a reasonable draw-down, which meant that commissions ate a large percent of my trading profits, considering my systems were short term in nature and I have limited capital.

Now, I try to develop multiple systems that have high average profit% per trade with little/no regard for exposure. Even if the system trades only once every two or three months, I can combine many of these systems to trade at a frequency I would be trading at with my old way, but still maintain a highly profitable trading system with lower risk (assuming the systems do not have perfect correlation). While it’s too soon to draw any conclusions from live performance, the historical backtest shows dramatically improved results.

Something odd that I found:

The 1990’s bull market, and the 2003-2007 market cycle are almost completely missing from the equity curve.

The popping of the tech bubble and the bull market since 2009 are almost completely missing from the equity curve.

To test this, I used my favorite mean-reversion system:

with two variations. Before I go into the two variations, I will post the results of this simple mean-reversion system traded on SPY from 1/1/2000 – 1/1/2013 for comparison. All results are  frictionless:

Variation One is vastly superior to the simple DV2 strategy when one factors for exposure and maximum drawdown. Variation Two has slightly lower returns when adjusted for exposure, but the maximum drawdown is reduced by 1/3. Using trend-following techniques to filter out bad trades can vastly increase risk-adjusted returns in mean-reversion trading systems.

Found out about Quandl, a search engine for data sets, from Data Science 101. It seems worth exploring.

Simple mean-reversion trading strategies in US equities have performed poorly since 2010/2011. Mean reversion is not dead, it never will be, but it may expressed differently than previously. Mean reversion prior to 2010, existed mainly in the form of extremes. The more extreme a pullback, the higher chance for a huge reversal. To test this, I ran 10 different frictionless  tests on SPY (from Yahoo! Finance) from 1/1/2000 – 1/1/2010.

Here are the results:

We can clearly see that the returns are largely derived from the 1-11 bucket, meaning that extreme mean reversion was the source of returns. In the past 3 years, mean reversion exists in more moderate forms. Extreme pullbacks no longer indicate large reversals, but moderate pullbacks are more indicative of future gains. To test this, I ran the same test from 1/1/2010 – 1/1/2013:

Here are the rules for another test I ran. This should be the result of the above rules if I allowed entries to be entered the same day as exits. 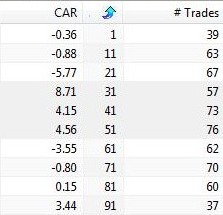 This is only a preliminary test over SPY, but it does lead to avenues for further research.